Most soils consist of mineral and organic materials. Soil develops from parent rock material and organic matter influenced by external factors, such as climate, organisms, topography, time and parent material.[1] 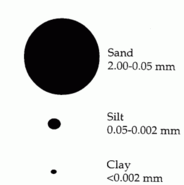 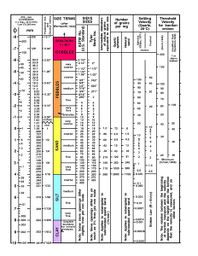 Organic matter originates from plant residues and manure. It is converted and incorporated into the soil under natural conditions by animals and micro-organisms, and under agricultural systems by tillage.

Clay particles and organic matter form durable and stable aggregates, called a clay humus complex, which is the result of activities of soil organisms, such as worms.

Soil structure is the way particles of sand, silt, and clay are assembled (FAO, 1985). The structure and the content of organic matter determine the infiltration rate of water into the soil and the water retention capacity of the soil. Both have effects on irrigation efficiency. Soil provides fixation for the plants, and supplies water and nutrients to the roots.

Soil water characteristics are determined by soil particles and their sizes, the soil type, as well as by the pores between the particles. The narrower the pores, the higher the capillary rise of the soil water (see Figure 4).

The forces influencing the soil water are:

Soil water is differentiated as follows:

A soil is saturated when all soil pores are filled with water, which normally occurs after sufficient precipitation or irrigation. Field capacity refers to the soil moisture content after all gravitational water has drained. The wilting point is the soil moisture percentage where plants are unable to take up sufficient water for growing.
For more detailed information on soil and water, see: Weave, J. Root development of field crops. 1926. 3 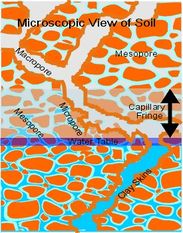 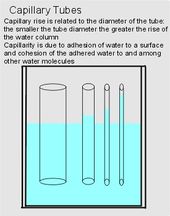