At mid- and high latitudes, climate change is predicted to increase agricultural productivity. In Africa, rain fed areas are expected to yield up to 50 % less by 2020, while the continents arid and semi-arid areas may expand by 58 %. More flooding is likely in the large river deltas of South, East and Southeast Asia, while in South America parts of the Amazon rainforest may turn into savannah, and agricultural productivity will decrease.

Coffee is particularly sensitive to changes in seasonal temperatures and rainfall. So Climate –induced changes in coffee production will affect all stakeholders in the coffee sector throughout the world. A total of 30 million coffee farmers around the world are likely to suffer declines in yield as a result of the changing climate.

Only a few days that are too cold or too hot during flowering or maturing will reduce yields and quality. Higher temperatures make the coffee more susceptible to disease, favor pests such as leaf miners, stem borers and certain nematodes.

Producers in Kenya, Mexico, Peru and Nicaragua suffer production losses as a result of prolonged drought, changes in the seasonal progression, and more common crop diseases. The areas suitable for coffee production will shrink and shift in location as a result of the warming. In Uganda for example there are few areas that might be planted to coffee, so their coffee areas will decline significantly (see figure). That will force coffee farmers to switch to other crops. Coffee bushes in lower altitudes are often planted in forests or under shade trees. So shift in cultivation with other crops will affect the environmental functions of these areas.

Producers and governments need clarity on where coffee can, and cannot, be produced in the coming decades, having climate change in mind. There is the need of a strategic climate-adjustment programme for the whole coffee value chain. In the producing countries, the coffee sector includes growers, producers’ associations, pulpers, buyers, certification agencies, wholesalers, transporters and exporters. In importing countries there are roasters, wholesalers, retailers and consumers.

Research institutes and gene banks have an important role in ex-situ and in-situ conservation, in providing varieties for breeding, and in identifying, studying and characterizing such varieties. Scientific tasks in addressing climate change in the coffee sector include continued observations of the changing climate and the development of climate models to make reliable predictions of local impacts in individual countries. 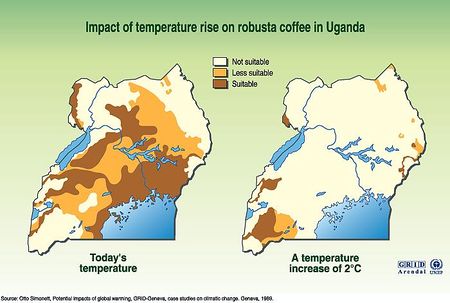 Ethiopia is the center of diversity of Arabica. A changing climate has a bigger impact in Ethiopia then elsewhere. A quarter of all jobs in the country depend on the cultivation, processing and marketing of coffee, as do 70% of Ethiopia’s foreign exchange earnings and 10% of its national budget. In the last decades fluctuations in the seasonal and annual rainfall become bigger and coffee harvest declined. Some coffee producers shifted their plantings to higher areas, while others were forced to stop growing coffee and switch to livestock and heat-tolerant crops.

Ethiopia has a unique genetic diversity of cultivated, semi-wild and wild Arabica varieties with different types of disease resistance, environmental adaptations and quality characteristics. This natural diversity is the basis for breeding coffee verities that are adapted to the changed climate. Arabica coffee is originated about 1400 years ago in Uganda. From there it was taken to Ethiopia and went to India and Sri Lanka. It was also spread to Java and Paris and furthermore it was smuggled to Central and South America.

The way that coffee spread across the globe led to an extreme narrowing of the genetic base, which has affected the disease resistance of varieties grown outside Ethiopia. For example, in 1970 the disastrous coffee berry disease was introduced to Ethiopia. But the country’s genetic diversity enabled it to be controlled, as a result of the 1974 discovery of variety no. 141, which is resistant to coffee berry disease as well as other major diseases. It is now the main type of coffee in Ethiopia.

Breeding thus represents one of suitable ways to adapt to climate change, as the example of coffee shows.