The scientific literature, as consolidated by the Intergovernmental Panel on Climate Change (IPCC), demonstrates that the ongoing changes in climate will have a wide range of impacts on human populations that vary in nature and intensity across the world. It has been said that, while warming is global, climate change is local.

Although climate change will have impacts that can be positive for some areas and groups of people, the most significant impacts are expected to be negative. Recent assessments suggest that some effects are advancing more rapidly than predicted by the IPCC, and the impacts can be more severe.[1] Any positive impacts for agriculture, in the form of increased rainfall and longer growing seasons, are expected mostly in the northern hemisphere, affecting the higher latitudes of North America and Eurasia. Areas where lower precipitation, coupled with elevated temperatures, will cause negative changes in water availability in general, and harmful affects on agriculture in particular, include the Mediterranean region, Southern Africa, the Western United States and Northern Mexico, and Brazil.

Moreover some groups within these regions will be more strongly affected than others. In order to design adaptive strategies, it is necessary to assess the regions, systems, and population groups which are most vulnerable to the impacts of climate change.

Vulnerability is defined in different ways by different users. The general definition that has emerged in the climate change

literature is the one articulated by the IPCC shown in the box at right. This concept of vulnerability subtends a framework which links human welfare to climate through the key concepts of exposure, sensitivity and adaptive capacity. These concepts are defined briefly below.

Exposure is the nature and extent of the changes in climate that a region experiences or will experience. It is expressed in the form of outputs of global circulation models (GCMs), and, increasingly, as results of analyses of past climatic records showing longer-term changes resulting from global warming. The GCM results must generally be down-scaled, using more fine-grained regional models to yield regionally-useful results. There is still substantial uncertainty in these predictions, stemming both from the uncertainty inherent in the models themselves and from the uncertain trajectory of future greenhouse gas (GHG) emissions as a result of our actions.

The sensitivity of a system to changes in climate specifies how its key natural resource-based systems respond to an exposure to climate change. Responses, of course, will differ from region to region and ecosystem to ecosystem. As precipitation decreases, for example, things like river flows, groundwater recharge, populations of native plants and animals, and agricultural crops will change in linked ways. A huge variety of factors influence system sensitivity. For river discharge, for example, factors include the degree to which snowmelt is a water source; share of groundwater contribution to river flow; evaporation rate from open water surfaces, the response of native vegetation extracting water from river margins, and so on. Modeling is usually needed for a comprehensive understanding of the interrelated causes and effects.

Adaptation is the key to a society’s ability to deal with climate change. It comprises the sum of actions taken to change behavior, shift priorities, produce needed goods and services, and plan and act in ways that reduce harmful climate change impacts or transform them into positive opportunities. Adaptation can be anticipatory or reactive, come from the public or the private sector, and be short or long range in perspective.

Adaptive capacity is the ability to adapt. It is a function of a society’s stock of infrastructure, its human resources, its technology base, its educational system, its research capacity, its wealth, its natural resource base, the structure of its economy, and many other factors. This is a key intervention point in the vulnerability paradigm.

With respect to climate change, adaptations are adjustments or interventions which are undertaken to manage the losses or take advantage of the opportunities presented by a changing climate. Adaptive capacity is the ability of a system to adjust to climate change to moderate potential damages, to take advantage of opportunities, or to cope with the consequences (IPCC, 2007).

These concepts are linked in the model shown below (GIZ 2008). 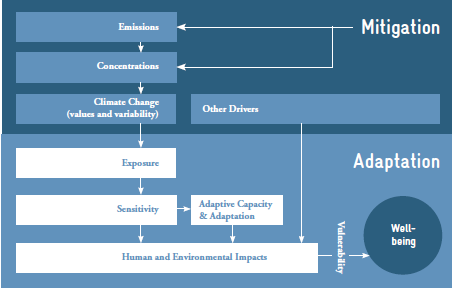 In it, the responses of natural systems to climate change, modified and buffered by the adaptive actions taken by societies and individuals, result in the human and environmental impacts of climate change. If a society were capable of adjusting perfectly for all of the harmful human impacts which would otherwise result from exposure to climate change, then vulnerability would be nil and the well-being of the population unaffected. Vulnerability, in this framework, comprises the residual effects on human well-being after a society has employed its adaptive capacity to moderate harmful changes.

Overall, this model has two important aspects that distinguish it from many other “vulnerability frameworks”. First, it considers more aggregate levels of society, up to and including the national level, in addition to the individual household. Traditional vulnerability models are centered on the household and focus largely on response capacity and decision making at this level. The focus here emphasizes larger-scale public actions as a complement to those individual ones taken at the household level.

Second, the model focuses on adaptation rather than on vulnerability. It thus places greater importance on things that can be changed to adapt to harmful climatic changes than it does on the characteristics of individual households that constrain their ability to adapt. This is not to say that household level strengths and weaknesses are unimportant, but simply to acknowledge that the magnitude and scope of expected climatic change impacts will often require larger-scale intervention that is well beyond the capability of individual households. The concept of vulnerability is still present in the adaptation and impact model, but it plays the more modest role of the “residual” that affects well-being of populations after adaptive actions have been taken. The focus on adaptation leads to a more pro-active stance than the traditional, and more passive, “vulnerability” approach.

The adaptation model presented above serves as a guide for developing adaptation priorities at a national level. Assessing exposure is the first step and draws on the outputs of global and downscaled regional models of predicted climate change impacts across the country. These impacts will be expressed in terms of expected patterns of temperature and rainfall, including both average and variability, frequency of extreme events, and sea level rise.

Assessing sensitivity is a two-step process. The first is to assess the impacts of the exposure on hydrology by using climate model outputs to drive hydrologic models that predict future patterns of snowmelt, runoff, groundwater recharge, evapotranspiration, occurrence of floods, coastal inundation, seawater contamination of coastal aquifers, and so on.

The second step is to examine the follow-on impacts of hydrologic changes on water-dependent human economic and social systems and important ecosystems. These include agricultural production systems; including crop agriculture, animal husbandry, and pisciculture; domestic water supply; industrial water supply; and riverine, estuary, and coastal ecosystems. Changes in agricultural production of various kinds will have huge impacts on human welfare in many developing countries, either directly or through their economic linkages. Changes in domestic water supplies, likewise, can have critical impacts on human welfare, whether water supply is from an urban piped system or from boreholes, springs, or streams in rural areas.

Ecosystem impacts are important to humans from a variety of standpoints. First aquatic ecosystems in developing countries are very often used as sources of food by fishers and hunters and as a source of medicines and other products. Additionally they play important roles in coastal protection, improving water quality, buffering flood flows, and climate regulation. They also may support recreation and tourism and have religious significance for certain groups, as well as having existence value (IIED, 2007).

Once the sensitivity assessments have been made, it should be possible to highlight areas where harmful impacts are expected to be particularly acute and to imagine types of adaptive actions which might be taken Specifying a particular set of priorities for action, though, depends on the society’s ability to implement needed actions; in other words on its adaptive capacity.

Assessing adaptive capacity is perhaps the most difficult of the three assessments. While it is clear that the capacity to adapt is related to national wealth, human resource capacity, the institutional base, government effectiveness, infrastructure, and the resource base, among other factors, there is no simple way to combine these factors into an assessment of the nation’s ability to adapt to intense and widespread change. Practically, it may be easiest to identify a family of possible adaptive measures and then assess the capacity of a society to apply these specific measures, rather than to try to characterize adaptive capacity in the abstract. Implementable measures can then be selected in an iterative process based both on potential impact, and ability to implement. In practice structuring the adaptive process in a series of graduated steps is often appropriate, beginning with screening to identify exposures, sensitivities, impacts, and adaptive capacities, followed by more detailed analyses in critical areas. All stages should involve extensive consultation with local stakeholders.

Potsdam Institute for Climate Impact Research and Climate Analytics (2012): Turn down the heat: why a 4⁰ C world must be avoided. World Bank, Washington DC. http://climatechange.worldbank.org/sites/default/files/Turn_Down_the_heat_Why_a_4_degree_centrigrade_warmer_world_must_be_avoided.pdf