Discussions on climate financing have played a vital role in the last international climate negotiations resulting in the commitment that developed countries would spend funds of $30 billion of new and additional resources from 2010-2012 as ‘fast start funding’ and $100 billion per year by 2020 as long-term funding.[1][2]

According to Buchner et al. (2011) a total of USD 97 billion climate finance is currently distributed annually to support mitigation and adaptation actions with the large majority of finances being used for mitigation. The study states that “the amount of private finance is almost three times greater than public finance”.[1] 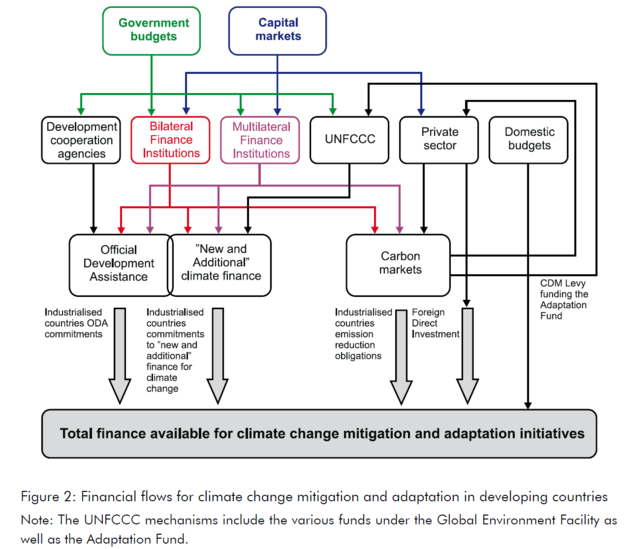 A high share of climate finances is related to the implementation of the United Nations Framework Convention on Climate Change (UNFCCC). As financial resources vary among the UNFCCC parties, developed countries (Annex II Parties) are required to provide financial support to assist developing countries in implementing the convention. To facilitate the provision of funds the Convention has established a financial mechanism that is operated by the Global Environment Facility (GEF) and accountable to the COP (Conference of Parties to the UNFCCC). The GEF Trust Fund mobilises a large share of financial resources for climate change and also manages two of the four special funds that have been established by the Parties - the Special Climate Change Fund (SCCF) and the Least Developed Countries Fund (LDCF). The Green Climate Fund (GCF) which has been decided at COP 16 (Cancun 2010) and has been launched at COP 17 (Durban 2011) is designed by a Transitional Committee compromised of 40 UNFCCC Parties. The Adaptation Fund (AF) is under the Kyoto Protocol.

The UNFCCC Finance Portal gives an overview on the funds managed by the GEF. Furthermore, it informs about provision of financial resource by Annex II Parties as communicated in their national communications and about the "Fast-start Finance" commitments of the developed country Parties (based on an agreement at the COP 15, Copenhagen 2009) to provide new and additional resources (approaching USD 30 billion for the 2010-2012 period) for mitigation and adaptation.

There are five dedicated multilateral climate funds that support adaptation in developing countries:

Finances for mitigation are much greater than for adaptation actions and originate from a wider range of sources.[1]

Among the instruments are the following:[5]

Additional funds since 2008 are for example:

An increasing amount of public finance for mitigation is provided by bilateral finance institutions, as for instance through Germany’s International Climate Initiative (ICI).