With an average annual per capita availability of less than 500 m3, Tunisia is experiencing severe water stress. The country’s potential of renewable conventional surface and groundwater resources is almost fully mobilized and exploited. With growing water demand as a result of population growth and economic development, agriculture’s share in total water use inevitably will have to decline from the present high levels (almost 80 %), thus calling for substantial improvements of current agricultural water management. Government efforts aiming at the promotion of a more rational and efficient water use are supported by several donors mainly through the Water Sector Investment Loan (WSIL)[1] [2], to which German Financial Cooperation (FC) through KfW is contributing among others by co-financing the modernization of public irrigations schemes in the Lower Medjerda Valley (Projet de Modernisation des Périmètres Irrigués de la Basse Vallée de la Medjerda; BVM).

With a total area of some 27,000 ha, the irrigation schemes of the Lower Medjerda Valley in Northwest Tunisia are by far the largest, almost contiguous public irrigation schemes of the country. The schemes have been built in the 1950s / 1960s as raised open canal systems and in the recent past have seen a continuous degradation mainly due to substantial problems in properly maintaining the old conveyance infrastructure and related, extremely high costs. As a result, conveyance efficiencies are very low at all levels and large parts of the scheme can no longer be adequately supplied with irrigation water, leading to a drastic decline of cropping intensities and production levels.

Against this background, the BVM project mainly consists of modernizing the existing gravity irrigation network by implementing the following measures: (i) rehabilitation and replacement of irrigation and drainage pumping stations; (ii) replacing the primary, secondary and tertiary distribution network by a pressurized, buried pipe system; (iii) drainage improvement; (iv) rehabilitation / construction of scheme / farm roads; and (v) installation of modern, on-farm irrigation systems such as sprinkler and drip irrigation. These main investment measures are complemented by an important capacity building component, mainly aiming at improving the organization and functioning of existing water user associations (WUA) and their qualification for effectively and fully taking over operation and maintenance (O&M) responsibility for the tertiary and secondary irrigation and drainage infrastructure.

During the project’s feasibility study, 5 irrigation sectors with a total net command area of approximately 4,070 ha and some 600 farmers have been identified as the project’s priority intervention area for the first pilot phase. Multi-criteria analysis involving technical, social, institutional/organizational as well as environmental parameters was used for selecting these 5 sectors, in addition to financial and economic cost-benefit analysis. In this regard, special attention was also given to selecting sectors with a predominantly small to medium farm size structure, since for the latter past experience has shown a much higher share of high-value, water-intensive crops and higher irrigation water consumption levels, while for larger farms a higher share of cereals and other lower value crops grown under rain fed conditions can be observed in years of sufficient precipitation.

While the overall project goal is to sustainably increase farmers’ income and thereby contribute to improving their living conditions, the specific project purpose is the efficient and sustainable use of water and land resources. The achievement of this specific purpose is to be monitored and evaluated using the following indicators: (1) cropping intensities of irrigated land; (2) cost recovery of irrigation and drainage charges; (3) efficiency of the conveyance and distribution networks; and (4) on-farm equipment with water-saving technology.

In financial terms, total project costs excluding farmers’ own investments for on-farm water-saving equipment were estimated at approximately 25 million € in 2003 prices, including physical contingencies of 15 % for major investment measures and price contingencies of 3 % per year over the implementation period estimated at 7 years. The average specific unit investment cost per ha was estimated at 6,140 € excluding on-farm investments, ranging from a low of 5,100 € per ha for 2 sectors (Mansourah, Habibia Sud) to a high of 8.100 € per ha (Bir Aouini), mainly depending on the sector-specific requirements for replacing and / or upgrading the existing main irrigation and drainage infrastructure.

For the economic analysis, project financial costs were converted to economic values by correcting for all direct and indirect taxes and by further applying standard conversion factors (SCF) to different types of cost items (civil works, equipment, services etc.).

On the benefit side, financial gross margins in the without and with project situations were calculated for a total of 32 main crops, comprising 3 cereals (hard and soft wheat, barley), 8 winter vegetables (mainly peas, potatoes and artichoke), 6 summer vegetables (tomatoes, peppers, potatoes, onions, water melons etc.), 3 winter and 3 summer forage crops, as well as a total of 9 fruit tree crops (apples, pears, peach, citrus, olives, grapes etc.). It should be noted that all these crops had already been grown by farmers for a long time, meaning that no new crops have been introduced by the modernization project. For the economic analysis, financial gross margins were corrected by systematically applying economic border prices to all traded inputs and outputs.

Project lifetime was assumed to be 25 years, including a rather long project preparation and implementation period of 7 years. Figure 1 below shows the pattern of undiscounted annual net project benefits in economic terms, revealing that from year 6 onwards annual net benefits are expected to be positive. The drop in annual net benefits from year 10 to 16 is due to high costs for capital replacement, including on-farm irrigation equipment. Figure 2 reveals that the cumulative undiscounted net benefit of the project turns out to be positive after 16 years only (break-even point), which is a rather atypical pattern for an irrigation development project. For BVM, this phenomenon in addition to the long project implementation period of 7 years is mainly explained by the extension of fruit trees areas by establishing new plantations (+ almost 270 ha), with a gestation period of 11 years to reach full yield potential. 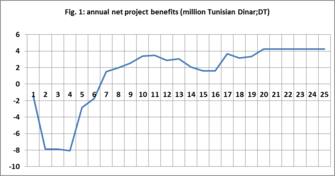 For the whole project, the average economic rate of return (ERR) at appraisal was estimated at 5.4 %, ranging from a low of only 1.6 % for Bir Aouini to 6.6 % and 6.7 %, respectively for the 3 sectors of Mansourah, Sidi Néji Est and Mehrine (see figure 3). These differences are mainly attributable to corresponding differences in specific unit investment costs as discussed above. In interpreting these ERR values, it should however be noted that a rather optimistic scenario has been adopted for the development of costs and benefits in the without project situation, assuming that there would be no further degradation of the old irrigation and drainage infrastructure, i.e. irrigation water supply and thus total irrigated areas and agricultural output would not decline further. 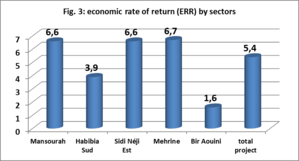 As a result of improving irrigation water availability and reliability, the main drivers for improved agricultural output and productivity and thus farm income include: (i) increased areas of high-value crops such as vegetables and fruit trees, in particular; (ii) yield increases: some 30 % for cereals and fodder crops; 10 to 30 % for winter vegetables; 20 to 70 % for summer vegetables; and 60 to 150 % for existing fruit tree plantations; (iii) increase of average cropping intensity from 91 % without project to 116.5 % at full development with project.

Project impacts in terms of improved farm incomes have been calculated based on average farm models for each of the 5 irrigation sectors, with average farm sizes ranging from 5.4 ha for Mansourah and Habibia Sud to a maximum of 12 ha for Mehrine. Figure 4 shows that for all sectors and farm models, average net returns during the first 1 to 3 years of project implementation would inevitably decline, due mainly to 2 factors: (1) substantial initial investments for installing on-farm water saving equipment at farmers’ cost; and (2) initial establishment cost of new fruit tree plantations. By year 5, the increase in average net farm returns is expected to be at least 50 % for all sectors, while at full development (year 11 +) average net farm returns would have improved by a factor ranging from a low of almost 2.2 (Habibia Sud) to a maximum of 2.86 (Mansourah). 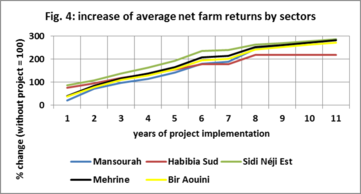 As shown in figures 5 and 6 below, successful project implementation would substantially contribute to achieving a more rational and efficient use of irrigation water as one of the key objectives of the current Government strategy in the water resources sector. On average, gross margins in economic terms per m3 of irrigation water (based on theoretical specific crop water requirements) would increase from DT 0.384 before project to DT 0.632 at full development after 11 years, or by almost 65 % (corresponding to 0.27 and 0.45 € / m3 at 2003 exchange rates). Differences between the 5 sectors are relatively small, Habibia Sud being the only exception (+ 26.7 %) mainly due to the comparatively low share of fruit trees in the total cultivated area (8 % only) in both the without and with project situations. 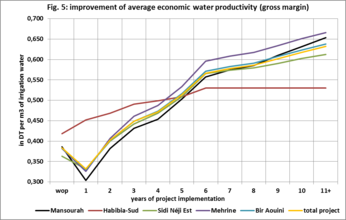 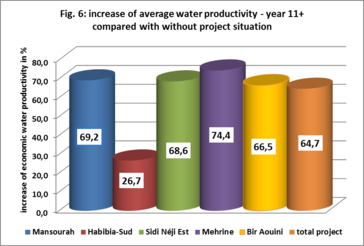