In the sahelo-soudanian agro-ecological zone of Sub-Sahara-Africa (SSA) which is generally characterized by extremely low and erratic rainfall allowing at best low-productivity rainfed cropping of cereals and other staple food crops, the construction of small-scale earth dams for rainwater harvesting and has long since been a traditional response of local populations to cope with these adverse natural conditions, primarily aiming at improving agricultural water management as a prerequisite for increasing local food production.[1]However, the technical efficiency of traditional small-scale dams is in most cases rather limited. Substantial improvements in terms of increasing cultivated areas and local food production can be realized by rehabilitating and up-grading the technical design of existing small-scale dams, as shown by this case study on the Small-Scale Dam Project in the Hodh el Gharbi / Affolé Region in the South-Eastern parts of Mauritania (see map 1) supported by German Financial Cooperation (FC) through KfW. 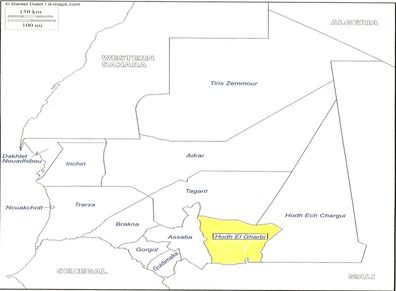 Long-term average rainfall in the project intervention area is only about 150 mm per year, usually concentrated in a small number of heavy rainfall days during the July to September rainy season. Due to topographic and geological factors, soil water retention capacities are generally rather low, thus leading to severe flood events. On the other hand, the region mainly because of its topographic and soil characteristics undoubtedly has an important potential for the construction of small-scale earth dams as the main rainwater harvesting technique which the local rural population has effectively been using for several decades, with some dams dating back to the pre-independence period.

However, after several decades of exploitation most traditional small scale dams are suffering from serious degradation, among others due to only rudimentary technical designs and increasing rehabilitation and maintenance requirements that exceed the self-help capacity of local populations. As a consequence, the areas effectively available for flood recession cropping of sorghum and cowpeas as the main food staple crops in the project area are continuously reduced, thereby compromising the main subsistence base of the local rural populations. As a matter of fact, the project area is characterized by a chronic food deficit, with local subsistence food production on average covering only about 50 % of annual requirements. In the absence of significant other development potentials both in the agriculture and livestock sectors and in rural non-farm activities, the rehabilitation of small scale dams at project appraisal was seen as the principal means for increasing local food production and availability as a prerequisite for any improvement in the living conditions of the local population and for effectively reducing widespread rural poverty (poverty incidence estimated at 70 % of the total population at appraisal 2000).

The existing potential of small-scale dams that might qualify for rehabilitation works under the project was assessed in detail during the project’s feasibility study which concerned a total of 19 dam sites. Based on technical as well as socio-economic selection criteria (especially beneficiaries’ willingness to participate in the rehabilitation works), this process led to the identification of a priority list of 8 dam sites with a total potential cultivable area of 740.5 ha, ranging from a low of only 28 ha (Bou Ghorda) to a maximum of 145 ha (Guellab). For all dam sites, the main technical rehabilitation and improvement measures were designed based on a 100-year flood event and comprised:

This main investment component is complemented by various small-scale supportive measures such as improvements of drinking water supply, construction of cereal storage facilities, fencing of reservoir areas as well as the provision of agricultural equipment at a limited scale. In addition, specialist extension services are provided through local NGOs with a view of improving crop husbandry practices and for supporting the establishment and functioning of community-based watershed management committees.[2]Particularly with regard to the technical design and issues concerning the social mobilization and organization of beneficiary populations, the project extensively built on the experience and lessons learnt from a similar FC programme previously carried out from 1985 to 1996 in 3 phases in the Tagant region of Mauritania (see map 1), mainly comprising the rehabilitation of 29 small-scale earth dams as well as 16 bottom outlets with a potential flood recession area totalling some 3,500 ha and benefiting almost 3,000 poor rural households.

The project’s overall goal is to stabilize and improve the subsistence base of the local rural population, the main indicator being the stabilization of the rural population around the small dam sites as well as a concomitant reduction of rural outmigration. The specific project purpose is the sustainable use of the dam reservoir areas for flood recession cropping and a reduction of the chronic deficit of cereals supply. At appraisal, the following indicators have been identified for measuring the effective achievement of this specific project purpose: (1) incremental sorghum production of 100 kg per capita and year through upstream flood recession cropping; (2) sustainable and regular dam maintenance; (3) production increases of other crops than sorghum (e.g. niébe / cowpeas).

The project’s main target group is represented by approximately 5,800 persons living around the dam sites selected for the project. With an average household size of 7.2 persons, the total number of beneficiary households is almost 800. In the pre-project situation, average farm size was estimated at less than 2 ha per household, of which 0.8 ha for flood recession cultivation in the upstream areas of the dam sites and around 1 ha rainfed cropping supported by earth bunds as a traditional soil and water conservation measure. In addition, rural household subsistence is complemented by various livestock whose contributions to total household income are however difficult to quantify in monetary terms.

Given the fact that rural households are primarily subsistence-oriented and hardly integrated into input and output markets, the assessment of the project’s financial impacts on average, representative beneficiary households has not been done using conventional gross margin and farm cash-flow analysis. Instead and as evidenced by the indicators referred to above for measuring the achievement of the project’s specific purpose, this assessment was based on quantifying the physical improvements in local food production and availability on a farm household basis. In this regard, successful project implementation for an average rural farm household with 7 persons is expected to lead to an increase of sorghum production from 450 kg per year before or without project to 1,000 kg (+550 kg or + 122 %), while for cowpeas incremental production was estimated at 150 kg per year and household (from 50 to 200 kg). The effective achievement of these average production targets would allow rural farm households to become entirely food self-sufficient in average rainfall years. However, figure 1 below shows that the average potential flood recession area per capita (0.13 ha for all 8 dam sites) is highly variable, ranging from a low of less than 0.1 ha for 3 sites, to a maximum of 0.55 ha. Allocation of land use rights is the responsibility of the local communities without any project interference and very little is known about the equity of land distribution among beneficiary households. 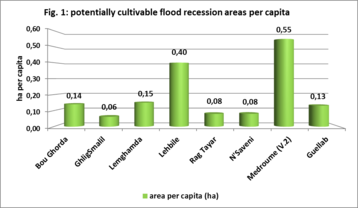 The economic analysis was based on the following simplifying assumptions:

In general, these hypotheses are rather conservative because the improved reservoir storage capacity and management usually also allows an intensification of crop husbandry practices (improved seeds, fertilization etc.) that should lead to yield increases of sorghum as the main crop. Furthermore, potential benefits associated with developing improved cropping systems through the downstream use of released reservoir water have not been taken into consideration (and would also require additional investment costs). The same applies with regard to the potential positive impacts on livestock production through improvements in animal drinking water supply, in particular.

Under these assumptions, the average economic rate of return (ERR) at appraisal was estimated at 4.9 % for the total sample of 8 dam sites and a net incremental cultivation area of 638 ha. However, looking at the economic profitability of each dam site reveals highly variable performance results. In this regard, figure 2 below clearly shows that for this specific type of investment into agricultural water management improvement, specific unit investment costs are inversely correlated with the potentially cultivable area to be developed. While the (weighted) average investment cost (in financial terms) was estimated at € 3,865 per ha and ignoring the specific case of Guellab as the largest dam, this value ranges from a low of € 1,442 (Medroume V.2 dam with 137 ha) to a maximum of € 6,213 (Ghlig Smalil), thus a ratio of more than 4:1. Figure 3 unequivocally highlights that the specific unit investment cost per ha is the key determinant of economic profitability. For the smallest dams and cultivation areas (Bou Ghorda and Ghlig Smalil with less than 50 ha), the economic rate of return (IRR) was estimated at less than 1 %, while for the dam sites having between 50 and 100 ha the IRR ranges from about 2 to 3 %. Again with the exception of Guellab dam, the IRR for the larger dams and cultivation areas exceeding 100 ha are much more acceptable, ranging from 7.8 % (Rag Tayar) to a maximum of 11.8 % (Medroume V.2). 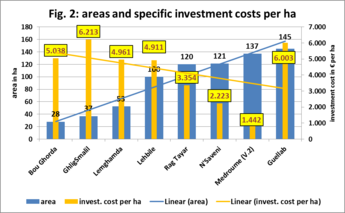 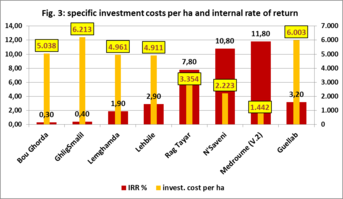 The rather low economic profitability of this specific type of investment into water resources mobilization and utilization was confirmed by the ex-post evaluation of the Tagant project referred to above, showing in retrospect for project lifetimes of 20 and 25 years an economic IRR of only 1 % and 2 %, respectively. However, the same evaluation estimated an IRR of almost 4 % if the social costs of rural outmigration are at least partially taken into account.

In general, the number of single-standing projects or programs specifically aiming at the rehabilitation and / or construction of small-scale dams for upstream flood recession cropping in arid or semi-arid areas is very limited. Accordingly, experiences available so far and best practices are also not well documents, particularly with respect to financial, economic and social impacts, including contributions to poverty alleviation. On the other hand, several multilateral and / or bilateral donor agencies have been and / or are currently supporting the rehabilitation and / or construction of small-scale dams mainly as a component or sub-component of natural resources or water resources management and development projects or as part of rural and community development project and programs. Concentrating on the Sahelian region, some project examples are listed below and suggested for further reading.

African Development Fund (January 2006), Project for the Development of Water Resources in the Dosso and Tillabéri Regions (PVDT). Republic of Niger (http://www.afdb.org/en/projects-and-operations/project-portfolio/project/p-ne-aac-008/; accessed 04.01.2013).

International Fund for Agricultural Development (December 1998), Report and Recommendation of the President to the Executive Board on a proposed loan to the Republic of Mali for the Sahelian Areas Development Fund Programme (http://www.ifad.org/web/ifad/operations/country/project/tags/mali/1089/project overview; accessed 04.01.2013).