By the growing worldwide demand associated to the constantly growing world population water will be one of the rarest resources on the earth in the near future. Several projects around the world are showing that the desalination of seawater is one of the possible options to face the expanding gap between water demand and water supply. Seawater is considered as an almost inexhaustible raw material to gain freshwater from. In this paper the most widely used methods of desalination will be mentioned.

The basic principle of the desalination is almost the same in every currently used method. As seen in figure 1 the objective of the different desalination processes is to split the sea or brackish water feed with a certain percentage of salinity in two separate flows: The desalinated, ideally as fresh water usable outcome and the highly concentrated brine which could be described as waste product of desalination. 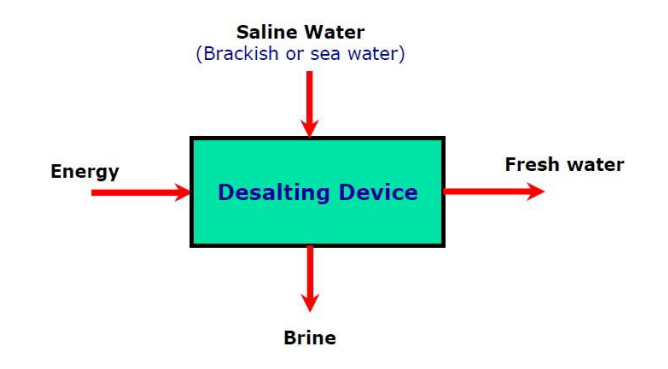 The MSF process is based on the evaporation and condensation of heated sea water. As shown in figure 2 the seawater feed is getting heated up in the heating section and is filled in a series arrangement of tanks with certain temperatures and pressure values. The combination of thermal conditioning and pressure in the tanks allows a continuing steam production even with decreasing temperatures due to the decreasing pressure values in the different stage tanks [fc. (Akili D. Khawajia*, 2008); fc. (ETH-Zürich)] Each tank contains a collector for the condensate that is produced through the cooling function of a heat exchanger which is powered by the cold seawater inflow.

The efficiency of the desalination process can be increased by the number of stages. As a result of the counter current of the module the cold seawater can be heated up step by step in each stage before it reaches the actual heating section. As part of this pre heating the amount of energy that is needed in the heating section can be decreased. That circumstance has a direct effect of the energy cost of the MSF-module. Modern, large MSF-plants have up to 28 stages [fc. (Akili D. Khawajia*, 2008)].

The multiple effect distillation is quiet similar to the multi stage flash method. As well as the MSF-method the MED-method is based on the separation of fresh water and salinity due to thermal distillation. Also the different, so called effects could be compared with the different stages within the MSF distillation. In contrast to the flash distillation the incoming seawater is not heated up before it is fed to the first stage to evaporate. It is sprayed on the tube surface of an evaporator located in each effect-containment [fc. (Akili D. Khawajia*, 2008)] This first evaporator is powered by an external source like process heat from power plants. The evaporator in the second effect is supplied by the vapour that arose in the first effect (see figure 3).

The vapor that is produced in each effect is clear fresh water which will be conducted through the fresh water output once it is cooled down during the evaporation process in the following effect. The salinity of the remaining brine will be increased in each evaporation process until it is discharged as highly concentrated waste brine after the last effect. Just like in the MSF-distillation the efficiency of the MED-method depends on the number of effects that are cascaded.

Unlike the previous mentioned desalination processes the reverse osmosis (RO) is not based on thermodynamically effects. The underlying concept of RO is based on the physical separation of the solved salt through a semipermeable due to imposed pressure. To separate the inflow of seawater into a fresh water flow and waste brine flow the osmotic pressure has to be overboard. The osmotic pressure between two fluids which are separated with a membrane depends on the difference of salinity between the two fluids. As a law of nature the two fluids with different concentration of salinity will always try to reach an osmotic equality due to the molecular exchange through the membrane until the salinity is equal. To prevent this phenomenon the imposed pressure has to be higher than the osmotic pressure. The needed pressure usually ranges between 50 and 80 bar for seawater desalination (Akili D. Khawajia*, 2008). If these conditions are ensured the water will be able to pass through the membrane to the permeate side without any salinity. (see figure 4).

Beside the two thermal based methods for desalination, the quality of the water which is produced with reverse osmosis depends on several influencing factors. Due to the used amount of pressure, the concentration of salinity in the treated seawater and the size of membranes the quality of the freshwater outflow can be affected (SCCG, 2005).