A dike normally runs along or parallel to a body of water such as a river or a sea, a dam runs across or through a body of water. A dike has water only on one side, a dam has water on both sides. The main purpose of a dike is protecting the land behind it from flooding (closing dike), whereas a dams' purpose is to retain the water.

Dikes and levees are embankments constructed to prevent flooding. Levees may be formed naturally or artificially. They prevent the water from overflowing and flooding surrounding areas.

Dikes are walls that hold back the sea. The land would be flooded if the dikes were broken down. The dikes were first built to reclaim land from the sea. In countries like Egypt and Bangladesh they will be needed, when the sea levels raise as it is predicted. 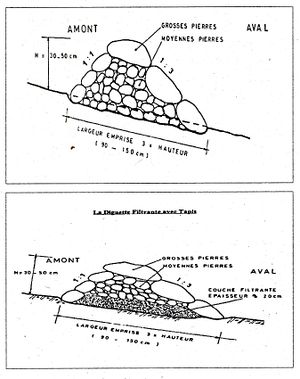 They are constructed out of different sized stones (small ones inside and larger ones at the outside of the structure) along the natural contour of the land with a height of 30 to 50 cm and a width twice or three times its height. As these measurements exceed the ones of contour stone bunds, permeable rock dikes may resist stronger water flows than ordinary bunds and are therefore often installed upstream of them to dissipate the force of the water runoff. With increasing steepness of the terrain it is recommended to additionally involve a filter layer at the bottom of the structure in order to deal with the heavy runoff. By slowing down the water flow the permeable rock dikes also contribute to an increased infiltration of water into the ground and to an enrichment of fertile sediment in the soil. The costs for permeable rock dikes may vary considerably depending on the distance to the nearest quarry. It has to be calculated with 48 m³ stones for 200 m of dike plus the costs for labour (60 man-days per ha).

Building permeable rock dams is a technique to restore seriously degraded farmland, forest and rangeland by filling gullies. The structure is made out of stone walls (large stones on the outer wall and smaller stones internally) that are over 1 m high within the gully it is constructed in, and 0.8-1.5 m high in the wingwalls, that are constructed as extensions on both sides of the dam. The length of the dam usually lies in between 50 and 300 m and the width of the dam is generally at least three times its height. For stability reasons, the dam wall is built flatter on the downslope side than on the upslope side and a blanket of small stones is laid as a foundation trench, which additionally reduces the risk of undermining. If the floodwater flow is very strong, it is required to build a spillway within the gully. The effect of a permeable rock dam is that the flow of floodwaters is slowed down and becomes spread over adjacent fields. So sediments build up behind the dam and fill the gully which stops lateral drainage from the adjacent land and therefore increases its productivity. Another effect is the increased infiltration of water upstream of the dam which results in a raising groundwater table in wells. The costs for a permeable rock dam may vary considerably depending on its size and the distance to the nearest quarry.

GIZ (1975): Manual of reforestation and erosion control for the philippines.