Rural territorial development is a specific approach within rural development which seeks to improve livelihoods in a defined political, administrative, natural or social territory.[1] Practical experience had shown that concepts addressing the development of rural areas should be intertwined with economic growth and social and environmental sustainability.

The vast majority of people in developing countries live in the countryside, where economic development is urgently needed to win the battle against hunger, poverty, resource degradation and climate change. When a rural economy suffers from poor institutions, livelihoods are often degraded; thus, the population may have few options but to migrate to urban, and often slum, areas. There are many natural phenomena which affect soil erosion or resource degradation which cannot be addressed by development agencies. However, manmade soil degradation can be targeted through strategies including socio-economic and political conditions. For example, while geologic erosion is a common phenomenon in soil sciences, the role of human-induced erosion due to over- and misuse of land resources has become a serious threat to economic development in rural areas. The role of institutions and governance plays an important role in limiting further losses of fertile land, and thus food insecurity, at a time of rapid population growth and climate change.[2][2]

GIZ developed the rural territorial development approach to advise authorities in developing countries on reform of public policy models in order to improve the institutional environment. The aim of this advisory service is to create an “enabling environment” through better institutions, decentralization, human resource development, effective infrastructure, management of natural resources with a view to promoting sustainability, transparency and conflict prevention.[1] Key challenges of an enabling environment are to upscale public policy and to create effective networks with the private sector. In agriculture, the private sector largely consists of smallholder farmers, who are in need of better cooperation with the authorities. This approach includes using civil society and traditional social structures to adapt the institutional setting to local conditions.

The territorial development approach is deliberately defined by GIZ in broad terms in order to enable its adaption to the local environment. It can either be defined in political or administrative terms, e.g. district, department, region; or by natural features such as water catchment areas, nature reserves, mountain range, river and water meadow systems, coastal zone or expanse of a forest. Additionally, the approach can also be defined by economic characteristics that may go beyond administrative borders or traditional boundaries, such as certain areas where indigenous populations live and depend on their livelihoods. Rather than providing a narrow definition, GIZ places its focus on goals and aims, e.g. preserving a water catchment area with valid administrative and organisational structures.[1]

a) the national level, where legal frameworks are provided to create the “enabling environment” and administers financial funds,
b) the meso-level (regional), where public policy is coordinated and decentralization efforts are implemented,
c) the micro-level (district, municipal and community), where the actual management of natural resources takes place and where participation of local people must be ensured.

The level GIZ has identified the meso-level as most crucial for the territorial development approach, as the micro-level often suffers from insufficient capacity. Initiatives on the meso-level should be carried out by local experts familiar with the situation in the areas where natural resource management is taking place. The meso-level acts as a hub to facilitate the participation through coordination and communication with all stakeholders involved in the management and governance of a natural resource, such as a water catchment area. Farmers and cooperatives, which play the most important role in depend entirely on a well-organised and implemented institutional environment.[1] 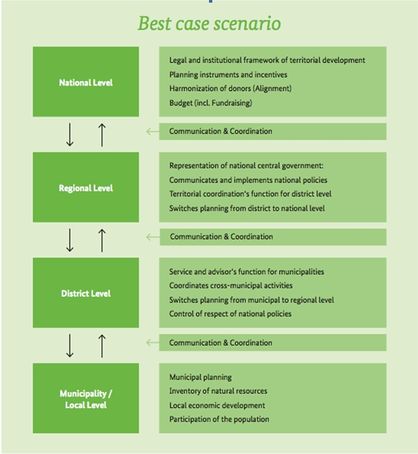 In the Republic of Niger, the legislative framework Rural Code was introduced in the 1990s to regulate land use and land tenure issues. Also under the name Code Rural, an institution was established to oversee land use and land tenure. This institution is positioned at the meso-level to coordinate local demand with national policies. Code Rural deals with the national authorities to coordinate land-related policies on a national level. Since Niger has eight ministries at the national level that jointly decide over land issues, coordination measures require significant capacity development to effectively communicate with the secretariat of the Comite National du Code Rural, the cross-departmental national committee that is given the task to formulate rural legislation on the national level.

The Code Rural institution may assign land titles on the local level to land owners and land users, which are assembled in land use commissions. Such commissions are comprised of local bureaucrats, elected local representatives, traditional tribal chiefs, members of the local civil society and representatives of land and water user groups. The commissions provide a forum for the local community to voice demands and prevent conflict over natural resources.
Therefore, the meso-level Code Rural institution plays a major role in Niger to harmonize the otherwise widely fragmented national and local levels through active coordination and communication. Through this institution, an active and democratic participation of users and decision-makers has been achieved since the 1990s to effectively and efficiently mitigate the challenges of land use and land tenure in Niger.