Consumed water is defined as water that has been evaporated, transpired, incorporated into products or crops, significantly contaminated or otherwise made unavailable to other water users. Water that has been withdrawn but not consumed and is returned to the system is called return flow (http://www.fao.org/nr/water/aquastat/). As shown in Figure 1, agriculture is the major user of consumptive water. Globally, around 50 percent of the water withdrawn for agriculture is consumed through evapotranspiration. Thus, the concept of water consumption mostly refers to evaporative losses. Non-consumptive water is almost entirely returned to the system.

While the world’s population tripled in the 20th century, the use of renewable water resources has grown six-fold. Within the next fifty years, the world population will increase by another 40 to 50 %. This population growth – coupled with industrialization and urbanization – will result in an increasing demand for water and will have serious consequences on the environment (http://blogs.triplealearning.com/20117). Worldwide, agriculture accounts for 70% of all water consumption, compared to 20% for industry and 10% for domestic use. In industrialized nations, however, industries consume more than half of the water available for human use, while more than 90% is used for irrigation in developing countries, in particular in semi-arid or arid countries (http://www.worldometers.info/water/). 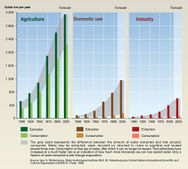 About 20% of the total 7,130 km3 of agriculture’s annual water consumption is ‘blue water’ – that is, water from rivers, streams, lakes and groundwater for irrigation purposes which accounts for around 40% of the world’s production on around 20% of the cultivated land. Globally, irrigated crop yields are about 2.7 times those of rain-fed farming. Hence, due to increasing food demand, the importance of irrigation will most probably also increase in future. There is still potential for expansion of irrigation in places where sufficient water is available, particularly in sub-Saharan Africa and South America.

Pathways to improve productivity and bridge the yield gap in irrigation include increasing the quantity, reliability and timing of water services; increasing the beneficial use of water withdrawn for irrigation; and increasing agronomic or economic productivity so that more output is obtained per unit of water consumed. Although there is still potential to increase the cropped area, some 5–7 million ha (0.6%) of farmland are lost annually because of accelerating land degradation and urbanization, which takes agricultural land out of production and reduces the number of farms as more people move to the cities. Increasing population means that the amount of cultivated land per person is also declining sharply: from 0.4 ha in 1961 to 0.2 ha in 2005 (WWAP, 2012).[1]

Predicting future water demand for agriculture is fraught with uncertainty; alongside population growth, water demand depends on what and how much people eat, on uncertainties in seasonal climatic variations, efficiency of agriculture production processes, grown crop types and yields, among other factors. Although projections vary considerably, future global agricultural water consumption (including both rain-fed and irrigated agriculture) is estimated to increase by about 19% to 8,515 km3 per year in 2050 (Comprehensive Assessment of Water Management in Agriculture, 2007). The Food and Agriculture Organization of the United Nations (FAO) estimates an 11% increase in irrigation water consumption from 2008 to 2050. This is expected to increase by about 5% the present water withdrawal for irrigation of 2,740 km3.

Although this seems a modest increase, much of it will occur in regions already suffering from water scarcity (FAO, 2011a) as Figure 3 illustrates.

Impact of climate change on water availability and use

Under different scenarios of the Intergovernmental Panel on Climate Change (IPCC), regions may become ‘drier’ or ‘wetter’, as there are a variety of possible ways in which climate change may impact the hydrological cycle in different areas and at different times. The uncertainties generated by climate change add a global dimension to the challenges of water resources management, as efforts to effectively manage water locally may be impeded by climate-induced hydrological impacts or increasing demands (WWAP, 2012, p.24).[1]

Influence of agriculture on the hydrological cycle

As water is a renewable resource, agricultural consumptive water uses are not entirely lost; they return within the larger and smaller water cycle. Water as a resource is primarily provided by precipitation from the large weather systems. As Millán (2012) points out, the amount of available water depends on the location of the watershed, and can result from different types of precipitation. For instance, isotopic studies of rain in tropical rainforests (Brazil) show that approximately 65% of the water precipitated in any one day during the rainy season comes from water precipitated on the three previous days. This suggests that at the beginning of the wet season there is a massive inflow of water vapor evaporated from the oceans, and afterwards the water is basically recycled (re-circulated) between the soil-forest and the atmosphere, producing a daily afternoon-evening shower.[3]
However, water as “renewable” must be understood in a spatiotemporal way. As water resources can be drawn upon beyond their ‘renewable’ capacity per unit of time, their management can become unsustainable. This is already the case for West Asia and North Africa, where withdrawals as a percentage of internal renewable water resources have exceeded 75%; and southern Asia and the Caucasus and Central Asia which have nearly reached 60%, the threshold signaling water scarcity. An addition significant problem is the change of water quality, which is affected by most types of water uses through chemical, microbiological and thermal pollution (WWAP, 2012, p.8).[1] Hence, not only climate change has an impact on the hydrological cycle and our water resources, but also the way we manage water has significant backlash. In concrete terms, about 40% of the total global runoff to the oceans has been captured for human use, with groundwater being used faster than it is being replenished in most dry areas of the world. Humans have extensively altered river systems through impoundments and diversions to meet their water, energy, and transportation needs: dams are holding back about 15% of the total annual river runoff globally (Steffan et al., 2004, p.113, Nillson et al., 2005).[4]

BMZ, GIZ, KfW (2012): Water-spreading weirs for the development of degraded dry river valleys. Experience from the Sahel. Published by GIZ and KfW. http://www.giz.de/Themen/de/dokumente/E-Water-spreading-weirs.pdf [2013-02-19].