The global water supply for agriculture is subject to increased scarcity as a result of increased demand, growing populations and climate change. This nexus is important to understand when identifying current and future pressures on water supply for agricultural production. Although the world is generously covered with water, only 3% of the planet’s water is of use for human consumption, e.g. potable water, water for industrial production, and water for agriculture. The vast majority of global water (70%) is used in agriculture. Useable water originates from precipitation, ground and surface water or, in recent decades, desalinated water. An important role has also been ascribed to recycled wastewater to expand the supply-side of water resources.[1]

The circulation of the water from the earth to the atmosphere and back is called the “water cycle” or “hydrological cycle”. The recharge of water into our ecosystems and availability for human consumption involves five stages: 1) the energy of the sun leads to an evaporation of water from lakes, rivers, vegetation and oceans from where it is 2) transported to the atmosphere in order to be 3) condensed as tiny droplets in clouds. 4) The water in clouds then returns to the earth via precipitation, which 5) either moistures soils to nourish vegetation to produce biomass, or flows downhill as run-off to either recharge groundwater or surface water storage systems such as rivers, lakes and oceans. From here it evaporates again to restart the water cycle.[2] 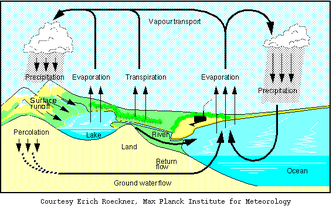 Precipitation is therefore the “ultimate” water source that reaches the land cover. However, the question that arises is where and how this water can be made of use for biomass production. Falkenmark and Rockstrom (2006)[3] have provided a conceptualisation (Figure 1) to further enhance the impacts of the water cycle. The water that reaches the unsaturated zone or root-zone of plants in soils is called green water. Green water has two parts: transpiration, the productive component that produces biomass; and evapotranspiration, the non-productive component that evaporates into the atmosphere. The subsequent water balance at any point is a measure of the water supply from incoming rainfall minus losses from outgoing evapotranspiration.[4] Green water plays the most important role in biomass production. However, not all parts of the world are endowed with similar patterns of precipitation, and this unequal distribution is further being exacerbated by climate change. Green water cannot be diverted to different uses other than biomass production.[5] 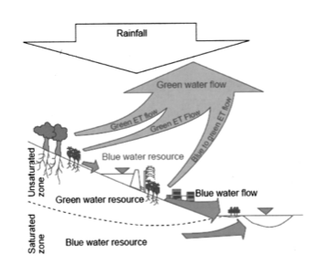 Blue water is run-off water that reaches fresh water storage systems such as rivers, lakes, wetlands and groundwater. Blue water can be stored and used for a specific purpose such as human consumption (drinking water); industrial consumption (including hydropower); or irrigating agricultural crops to produce food and other biomass. In some regions of the world, such as the Middle East, blue water is sometimes the exclusive source of water due to the arid conditions in deserts. Blue water is often the source of water that the public associates with competition and even conflict. When used in irrigation systems, blue water has the highest productivity of all water sources.[6][5]

Figure 3 shows the proportions of blue and green water. Blue water is found in the flows and storages of freshwater, at the surface and in groundwater aquifers. Green water, i.e. the majority of the water in the terrestrial environment and associated with vegetation, is mainly found in soil profiles, in plants and crops. Green water cycles through the hydrological cycle in the soil profile, as stemflow in plants and via the process of evapotranspiration. All green water is invisible. Most of the blue water is groundwater and is also invisible. Only a tiny proportion of the water in the terrestrial environment is visible, with only 1.5% is used by people.

Recycled water, or grey water, is a water source of growing importance in water-stressed regions such as the Middle East, as well as all across the world. Grey water artificially prolongs the life span of drinking water or water used in irrigation systems. The recycling mechanism involves several steps of filtration, microbial digestion and purification to make it fit for human consumption.[8][9]

Since the vast amount of water on earth, i.e. the saline water in oceans, cannot be used for human consumption, desalination technologies which turn saltwater into freshwater have found increasing application in temperate as well as arid zones. Several technologies, including reverse osmosis and thermal processes such as multi-stage flash and multi-effect distillation, have been developed to provide safe drinking water generated from saline water to humans. It can also be recycled to expand its life span and used for irrigation of crops. However, desalination technologies are usually highly energy-intensive; hence, the production of desalinated water incurs high costs and is currently too expensive for low-income countries.[10]