Quinoa - from the Andes to the World

Quinoa is a close relative to spinach. While we eat the leaves of spinach, we eat the grains of quinoa. Quinoa has been cultivated 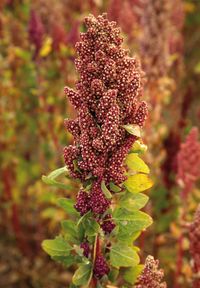 in the high Andes for over 6000 years. It was first grown along the spine of the Andes, from Colombia to southern Chile and Argentina. Quinoa grows in Peru and Bolivia at 4000 masl and most of its genetic diversity rests in these countries, around Lake Titicaca. This important crop is raising inter- est in other regions, such as Africa, Asia and the Arabian Peninsula. Thousands of years ago, Andean communities relied on quinoa to survive, by planting quinoa around their villages. Grains were used for human consumption and leaves to feed llamas and alpacas. Centuries of cultivation resulted in the arousal of many quinoa varieties, whose traits make them capable to adapt to higher or lower lands and to extreme weather conditions.Quinoa plants vary in size, bushiness, and color of leaves and seeds. Seeds also vary in size and time to maturity. Most notable to the outsider is the rainbow of flower colours: red, purple, green, pink, lavender, orange, burgundy, yellow, ochre and even black. Quinoa ecotypes exhibit a wide variety of genetic traits depending on where they come from. There are ecotypes from the inter Andean valleys of Colombia and Ecuador, the highlands of Peru and Bolivia, the Yungas in Bolivia’s sub-tropical forest, the salt flats of Bolivia, Chile and Argentina, the coast of Chile, and from northern Argentina.

Quinoa is rich in protein and micronutrients. Depending on the variety, the protein content of the grains can range from 11 to 18%. This is higher than the protein content of rice and wheat, mak- ing quinoa optimum for human consumption.The high nutritional value of quinoa lies in its con- tent of amino acids, the individual components of proteins. Ten amino acids are essential for human metabolism and have to be taken from food be- cause our body cannot synthesize them. Quinoa contains all 10 essential amino acids, including lysine, a key component to normal growth and responsible for a strong immune system. Due to its high protein contents and excellent ami- no acid composition, quinoa is the most valuable source of plant protein. It is also rich in fiber, min-erals, vitamins and fundamental fatty acids such as linoleic acid or Omega-3 acids. Quinoa is gluten free, which makes it ideal for celiac, vegetarian and vegan consumers. Quinoa’s nutrient content is so exceptional, that is NASA´s preferred food for astronauts. Quinoa grain composition depends on variety, soil characteristics as well as growth and climate condi- tions. As diverse as the look of the plant is the pro- tein, fat, starch, fiber, vitamin and mineral contents of the grains. For these reasons, quinoa has played a key role in the food and health of farmer families of the Andean highlands, the region where quinoa has traditionally been cultivated.

Quinoa blooms where other crops no longer yield. It develops with 300 mm of annual rainfall and withstands wide ranges of daily temperature. For these reasons, it is suitable for the desert lands of the Arab Peninsula, or the semiarid lands of some regions of Kenya. Soil salinity is not an obstacle for cultivation. On the contrary, some ecotypes of Bolivia, Chile and Argentina need saline soils as they originated in the salt lands of these countries. With the characteristics described, quinoa is ideal- ly equipped to face climate change. And given that it can yield in a short time–some varieties can be harvested in 4 months–it will play a key role in the future food security of the world. With the help from spatial analysis methods, scientists can predict which regions will be optimum for quinoa cultivation in 40 years time. To predict the future, scientists first find out where quinoa was cultivated in the past and use those data to figure out which conditions are favourable to grow the crop. Data are introduced in climate change models to make predictions. The climatic conditions of many areas of South America where quinoa is grown at present are going to be worse up to the middle of this century. But even if we have to act before it is too late, hope lies in the huge genetic diversity of quinoa, the pool from where new varieties better adapted to the impact of climate change can be produced. This breeding task should start immediately.

The maps illustrate how the growing conditions for quinoa in South America are going to change. The areas colored in red and blue show where quinoa is cultivated today. In 2050, due to climate change, only the areas marked in blue will be suitable for cultivation. The map on the left clearly shows the effects of climate change in Bolivia, Peru and Ecuador, the main current producers of quinoa. 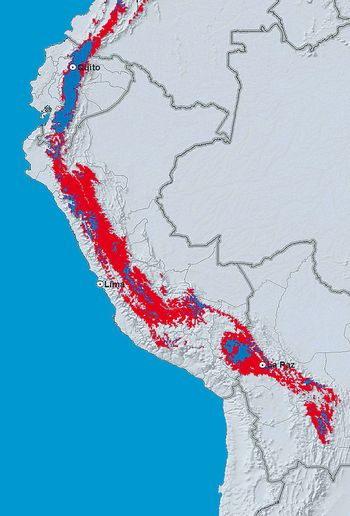 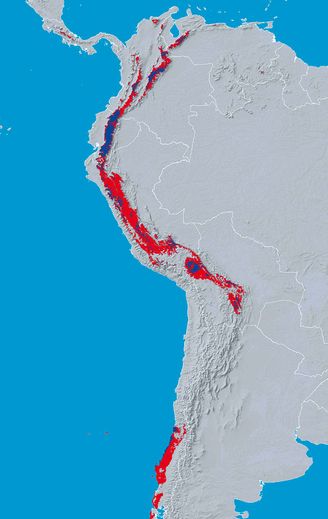 From sacred grain to food of the poor

German naturalist Alexander von Humboldt came across quinoa during a trip throughout South America in the early 1800s. He noted that quinoa was to the economy of Incas as wine was to the Greeks, wheat to the Romans and cotton to the Arabs. Quinoa was the main staple of the Tiwanaku people, a flourishing pre-Incan empire that lived around the southern shores of Lake Titicaca, where quinoa cultivation likely started. Quinoa was the »mother grain« of the Incas, who believed that mythical bird Kullku had brought the first seeds to them. At the beginning of every year, the Inca Emperor planted the first quinoa seeds using a golden digging stick. The area planted to quinoa in the Andes today matches what used to be territory of the Inca Empire. During the Spanish Conquest, missionaries noticed that Incas used quinoa in religious rituals and discouraged its cultivation. In time, quinoa was socially disparaged as to become food of the poor. The crop survived, mostly in marginal areas, to which it is ideally suited. A renaissance of quinoa began in the 1970s, when outsiders started to appreciate its nutritional value. Quinoa production is now higher than at any time in the recent past. Bolivia, Peru and Ecuador, together, plant nearly 1000 km2 to quinoa, and jointly produce around 78,000 MT. Two thirds of the area planted to quinoa are in Bolivia (63%), one third in Peru (36%) and just 1% in Ecuador. The crop yield per square meter reaches 50 grams in Bolivia, 100 in Peru and 75 in Ecuador.

Impact of the quinoa boom in the livelihoods of Andean farmers

Cultivating quinoa is the main source of income for the families of southern Bolivia highlands. Grain price tripled between 1999 and 2008, triggered by export price. The higher income that farmer families are receiving for the grain has increased their livelihoods compared to that of other rural areas of the country. These families can now buy more food, including fruits and vegetables, send their children to school and pay for health care, without having to move to other regions for work or sustenance. The quinoa boom has is dark side, though, because quinoa is no longer food of the poor in Bolivia and Peru. The domestic price of quinoa grains has increased so much that the poor can no longer afford what used to be their staple. Instead, they eat more rice and pasta to fill up, even if they get fewer nutrients. Even quinoa growing families eat less quinoa than before, because they prefer dishes that take less effort to prepare, even if they are less nutritious. The distribution of earnings is also uneven. The higher price of quinoa favours transformers, exporters, importers and retail commerce, not so much the farmer families that only perceive a small percentage of theses earnings. To change this situation, quinoa producing countries would have to export grain and products such as flour, cakes, cereal bars and quinoa pasta. This would help growers from Bolivia, Peru and Ecuador to benefit economically, and producing countries could use this additional income to fight poverty.

Quinoa is a successful export product, especially for Bolivia. Almost half of the annual harvest is exported to the US, Canada, Europe, Israel and Brazil. White big grain quinoa is available in organic shops and supermarkets of importing countries; this popularity, however, occurs at the expense of a decrease in variety diversity in the fields. Migration of rural population to cities, over the years, in search for a better life makes the situation worse. When rural families migrate, the diversity of quinoa varieties in the fields disappears because varieties survive only if they remain in use. Main- taining endangered varieties is not always possible by transferring them to other regions. That is the case of Royal White quinoa, cultivated predominantly in the southern Bolivian highlands, because it cannot grow in the northern soils next to Lake Titicaca. Cultivation practices have also changed as a result of recent commercialization. In the past, farmers used to grow quinoa on the slopes only, and allowed soils to rest between planting sea- sons to recover. Today, they grow simultaneously in slopes and valleys, without pause between seasons, which in time decreases yield and erodes soils. Quinoa cultivation in Peru and Bolivia has to become more sustainable. It is fundamental to use varieties resistant to pests and diseases as well as cultivation practices that increase yield without harming soils or the environment. It is also fundamental to increase grain productivity to reduce prices and allow poor consumers to regain access to their ancestral grain.

A promising future for a versatile crop

Quinoa can be used to make many things, even beer. Quinoa flour is used to make bread and cakes as well as to prepare soups and sauces.But quinoa is more than a foodstuff. Saponins, discarded as a waste for a long time, are a highly demanded raw material for the industry to make food and natural cosmetics such as soap. Saponins can also be used to prepare pesticides, as they are harmless for mammals and human beings. The pharmaceutical industry is interested in saponins for their bactericide and fungicide properties, and because they facilitate absorption of some medi-cations by the intestine.Another very promising commercial use of quinoa is to get natural colorants and cold pressed oil from the grains. Ecotypes with very strong colors and high oil grain content have great genetic potential.The future of quinoa looks promising as it offers farmers families a number of chances to increase their income and enhance their livelihoods. Sustainable ecotourism that would help commercialize quinoa and its diversity as living cultural heritage would also contribute.