Salinization is an accumulation of salts in the soil and on the surface of the soil. Salts enter the soil through irrigation; they originate either from geological layers, from groundwater or from man-made influences, such as fertilizers.

Crops vary in their reaction to soil salinity. Due to reduced water up-take in relation to the soil salinity, yields will decrease as the plants wilt and eventually die. Crops which are relatively salt-tolerant include date palm, cotton, barley and sugar beet.

Worldwide, approx. 30 million ha of the irrigated total 237 million ha are heavily affected by salinity . In light of the increasing food demand there is an urgent need to stop the progressive salinization of agricultural land. Soil salinization can be combated by drainage, leaching, improved fertilizer management, appropriate agronomic practises, and cultivation of salt-tolerant crop varieties.

Salts dissolved in water separate into ions (see Table 1), with each affecting soils and crops differently.

The salinity of irrigation water is given in percentage (%), gram per litre (g/l), milligram per litre (mg/l), parts per million (ppm), total dissolved solids (TDS), or in deciSiemens per metre (dS/m) which is the electrical conductivity (EC). The EC is measured with special meters and is an indicator of the dissolved solids in a given water.

For ease of orientation, Table 2 approximately equates the different measuring units of varying salt contents from different water sources. The EC measurement is dependent on the water temperature: the EC rises with increasing water temperature. As EC is normally measured at 250 C, modern meters automatically adjust the measurement to 250 C.

The EC measurements give information on the total content of minerals/ions in the water, but do not inform regarding the composition (quality) of the water. Often an index is added to characterize the purpose of the water use, e.g. (ECiw), with ”iw” indicating irrigation water.

It is important to monitor the irrigation water quality with regard to salinity. This is normally done by measuring the electric conductivity of the irrigation water (ECiw). Likewise, it is important to monitor the soil salinity. Soil samples are taken and the (soil) water of a saturated soil paste sample is extracted in labs in order to determine the electric conductivity of the soil water extract (ECe). In the case of constantly applying irrigation water of the same salinity and leaching the soil with a leaching fraction of 15-20%, a steady state will develop in the soil. According to the FAO, the EC of the saturated soil paste extract will, in the long run, be 1.5 times the EC of the irrigation water: ECe = 1.5 ECiw. The GTZ Brackish Water Project in the Jordan Valley also had similar results.[1]

A rough classification of irrigation water is given in Table 3

Examples of crop tolerance to water salinity in Jordan 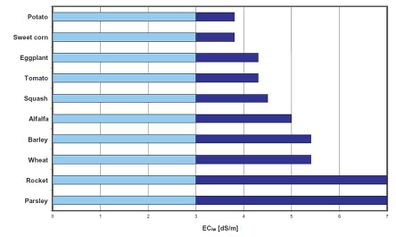 Agronomic practices to cope with salinity

The application of manure helps to maintain soil fertility and to create good leaching conditions (see following section). The salt index of the fertilizer should be taken into consideration when fertilizer is applied. The salinity index provides a rough estimation of a fertilizer’s possible contribution to soil salinity.
Sometimes saline/brackish water is blended with fresh water to reduce the salinity of irrigation water. However, the Brackish Water Project in Jordan does not recommend this practise as it is not economically viable. Instead, alternate irrigation is suggested. During sensitive growing stages, such as germination, irrigation with freshwater is recommended. Later, when crops are more tolerant, moderately saline water can be applied.
Drip irrigation equipment allows control of salinity through appropriate application of irrigation
water quantities, appropriate timing and high application uniformity. When the dripper lines are covered with mulch, e.g. plastic mulch, less water is needed and thus less salt enters the soil.

Leaching is applying additional water to the crop water requirement which helps to wash out salts below the root zone. The excess water should be extracted through subsurface drainage.

GIZ/Petermann, Thomas (1993): Irrigation and the environment. A review of environment issues.

Use of mineralized artesian water to organize irrigated crop farming in the Kyzylkum, Uzbekistan