The water footprint of coffee

Coffee is the most widely traded agricultural commodity in the world, with 2.25 billion cups of coffee consumed globally every day (Pendergrast, 2000). Compared to other agricultural commodities, coffee production and procession requires relatively low amount of water. However coffee trade involves significant virtual water exchange: coffee beans are exported from often water scarce producing countries in the Global South to be then roasted, served and consumed mainly in Europe and the U.S.

According to Chapagain and Hoekstra (2007), drinking one standard cup of coffee in the Netherlands requires approximately 140 litres of water, by far the largest part for growing the coffee plant. This large amount of green water need of the plant might be problematic in many of the coffee producing and exporting countries which are particularly prone to climate change and to increasingly unpredictable rainfall patterns. While the coffee production and yields differ from country to country, GTZ (2002 cited in Chapagain and Hoekstra, 2007) estimates that water needed to produce 1 ton of raw coffee cherry ranges between 1 and 15 m3.

The two major varieties of coffee are Arabica and Robusta. Both take approximately 3-5 years after plantation to give yields: the seed of the tree which is most widely known as the coffee bean. The water requirement of coffee may differ slightly depending on the climatic conditions of the producing countries, hence on soil condition and rainfall patterns and whether the coffee is wet or dry processed. During wet-processing, first the pulp is removed by using mainly hand-pulping machines. Then muscillage is removed through fermentation before the beans are laid down on the ground to dry (Kule, 2010). During the dry process, the beans are dried under the sun immediately after picking until they reach the desired moisture level (Seyer, 2002). After drying process, the parchment layer is removed by the same hulling process. Then the “green beans” are ready to be exported and the final stage of the process usually takes places in the target consumer countries (mainly Western Europe or the U.S) where the beans are roasted and brewed, transforming the green beans into the aromatic hot drink we all know. 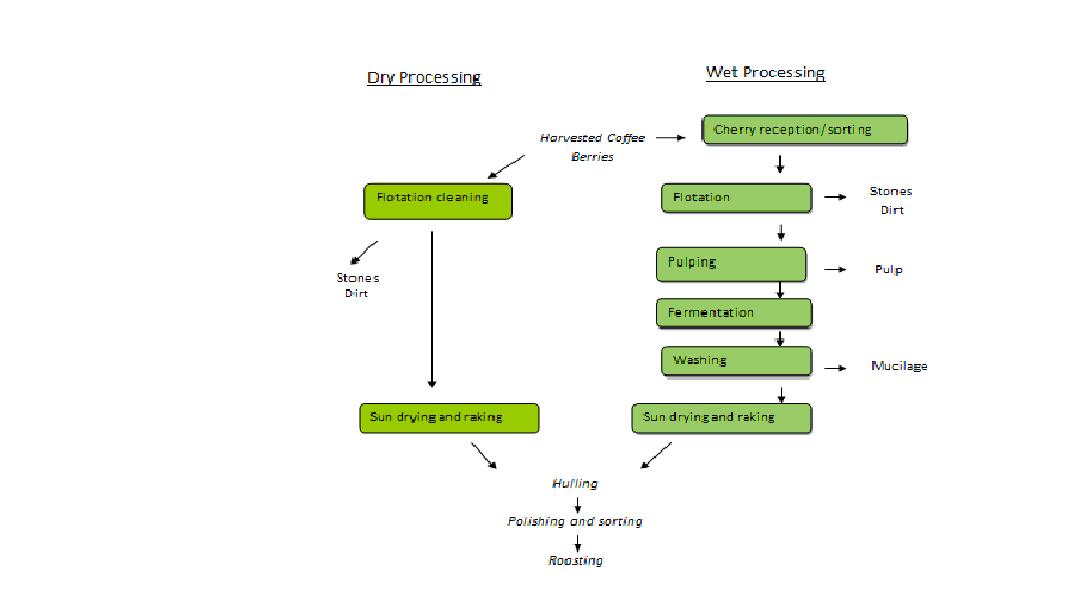 The demand for wet-processed Arabica and Robusta has grown significantly as wet-processed coffee beans are judged to have higher quality and richer taste. The increasing demand for wet-processed and other specialty coffee – including decaffeinated coffee- requires more and more freshwater in the coffee processing cycle (for the flotation, fermentation and washing) and some cases leads to pollution as efficient wastewater handling at coffee plantations proved to be problematic in the Global South.

Just as in the case of other agricultural commodities, coffee trees (most of them managed by smallholder farmers) are also prone to the increasingly unpredictable weather conditions. Droughts compounded with erratic rains have had detrimental effects on floweration and the cherry maturation. Drought alone causes a production loss up to 20% while unpredictable rainfalls lead to detriment in the quality of beans (GIZ, 2010). Excessive rains accelerate the spread of diseases such as the Coffee Wilt Disease (CWD), which killed approximately 200 million trees in the past 10 years just in Uganda (Café Africa, 2012).

Uganda is the second biggest African coffee producer after Ethiopia, contributing to the world coffee supply by 2,2% (Fair Trade Foundation, 2012). According to Chapagain and Hoekstra (2007), the crop water requirement of coffee is the 5th highest in Uganda among the 25 coffee producing countries examined with a virtual water content of 17079 m3 per a ton of green coffee. Uganda is the biggest African exporter of coffee therefore the amount of water traded to its main target regions should be emphasised. For instance, the annual Fair Trade coffee sales in the UK alone increased from 15.5 million to 194 million pounds between 2000 and 2011 (Fair Trade Foundation, 2012). 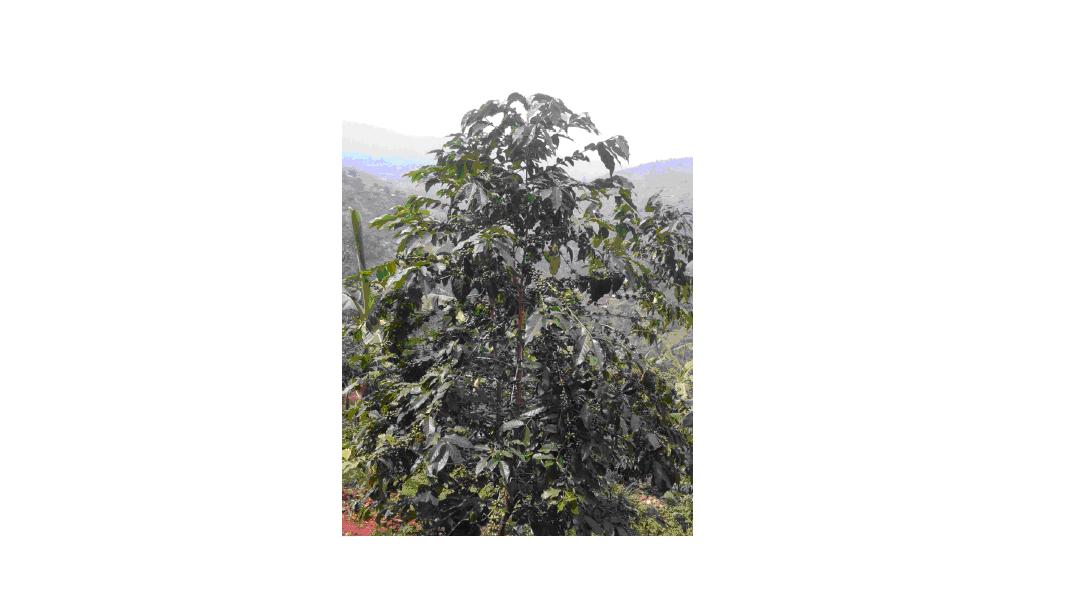 As demand for washed Arabica has grown globally in the past years, farmers are encouraged to wet-process their coffee beans because it will automatically guarantee higher price for their products. Yet case studies have shown that farmers are constraint in terms of inputs adapting to this new market opportunity (Hegyi, 2012). The facilities and the water resources washed Arabica requires is often not available for the farmers, especially in Arabica growing region of Western-Uganda, including the Rwenzoris.

While Uganda is considered as water abundant country (Hoekstra & Hung, 2002), coffee farmers rely heavily on rainwater and river to cover all their primary and secondary water consumption. In lights of climate change and recent surge in demand for washed Arabica, a more reliable water management would be desirable in the coming years which in exchange would also enhance the livelihood of smallholder coffee farmers.

Chapagain, A. K. & Hoekstra, A. Y., 2007. The water footprint of coffee and tea consumption in the Netherlands. Enschede: University of Twente.

Pendergrast, M., 2000. Uncommon Grounds: The History Of Coffee And How It Transformed Our World. New York: Basic Books.

The ‘CRS Coffeelands Blog’ lists interesting case studies, interviews and videos on the work of the Catholic Relief Sevices with smallholder coffee farmers worldwide. The articles on the intersection of coffee and water might provide a relevant insight to the topic.