Water User Associations (WUAs) are self-governed organisations of farmers who pool their financial, technical and human resources for the use and maintenance of a defined watershed, including irrigation agriculture, livestock production and fisheries. WUA members can range from small-scale or peasant farmers, e.g. in India, to large commercial farmers, e.g. in California.[1] For policy-makers, planners and technical experts, WUA forms a conceptual and institutional tool to transfer water management from a higher political level to the actual users of water resources for agricultural production. This bottom-up organisational form of water governance aims to lead to “effective, comprehensive, integrated and sustainable” reform in water management in order to enhance perceived gaps in irrigation performance.[2]

Description and origins of WUAs

The establishment of WUAs marks “a transfer of responsibilities and authority from the political level (government agencies) to non-governmental organisations”.[2] WUAs manage water at the lowest level in a participatory and democratic manner (see table below), where the users of water, namely farmers, can elect leaders, collect water fees, implement maintenance and resolve potential conflicts over water use internally. It marks an alternative to other organisational forms governed by either the public or private sector.

The organisational concept was first introduced by Elinor Ostrom et al. in “Rules, Games, and Common-Pool Resources” (1994) to propose how to govern scarce resources at the lowest level of decision making and use.[3] In the development sector, the WUA concept has found widespread acceptance amongst many leading organisations involved in water governance strategies, such as GIZ, FAO, IWMI, and the World Bank, in order to effectively govern water resources pressurised by climate change and over-allocation. Results from the field have shown that if water users themselves directly decide the use of water, the performance of irrigation schemes increases, thus providing social and economic incentives to farmers to manage water more effectively (see section 3).

WUAs have been implemented in various countries across the world. Each country’s needs and prerequisites must be thoroughly assessed before the first phase is launched. The social fabric of each country must be considered with great care. For example, the establishment processes of WUAs in African countries around small dams such as Burkina Faso were specifically designed to promote a pro-gender approach.[4] In addition, environmental analyses of water availability, the application of agronomic tools such as crop water requirements, and analyses of soil structures must play a pivotal role in the advisory services provided to the executing authorities that establish WUAs.[5]

A wide range of water user organisations has existed for centuries across the world, governed by a variety of legal facets. Today, traditional legal governance forms of watershed management pose particularly significant challenges to modern forms of WUAs due to the collision of customary law application with that of modern law.[6]The challenges and risks of modern adaptations of WUAs in developing countries such as Ethiopia will be outlined in section 4.

GIZ has actively engaged in the international debate in the development sector to promote the application of WUAs in developing countries. As a result, four phases have been identified for the successful development of WUAs.[7] 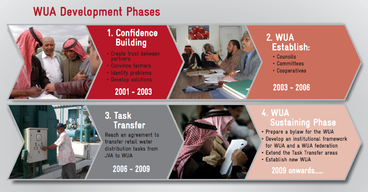 The Hashemite Kingdom of Jordan is one of the most water-impoverished economies in the world. With an annual per capita availability of less than 150m3 of internally renewable water resources, the country falls dramatically below the water poverty line of 1000m3 per capita/year. Water efficiency therefore plays a major role in meeting the demands of future socio-economic development in the Kingdom. Jordan is a country with long experience in irrigation agriculture. The 1950s and 1970s saw a substantial expansion of irrigation agriculture to meet population growth. However, over the following decades, maintenance problems occurred due to an unclear distribution of executive powers.[8]

Since the introduction of WUAs, the scarce water available in the Jordan Valley is being used more efficiently in irrigated farming, and farmers are showing greater acceptance to pay water fees for cost recovery of services. Water leakages have also decreased due to the adequate maintenance of irrigation systems by WUAs. For example, in the Al Kafrein area in the Jordan Valley, the daily water use decreased by 50% from 12.000 m3/day to 6.000 cm3/day.[10] Around 30% of the farmers in the Jordan Valley have been trained in the use of treated wastewater for irrigation according to environmental and health standards (see Management of Water Resources Programme in Jordan website).[11] 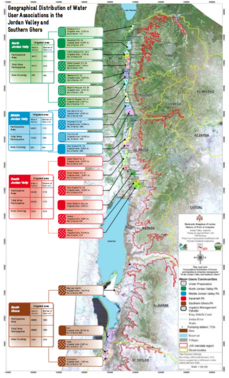 The project in Jordan has faced many difficulties since its establishment. Mistrust and resistance of farmers, in particular those with large land holdings, has caused continuous challenges over the years. In addition, technical difficulties occurred due to water shortages and a worn out distribution network. These challenges were addressed through the promotion of open dialogue and full transparency, in order to encourage farmers to work on joint solutions which would include and convince all farmers. The technical problems were addressed by timely technical support and information provision on best practices in agriculture.

As indicated earlier, WUAs have a long tradition in many parts of the world. However, examples from Egypt and Ethiopia show that successful implementation of WUAs may face severe challenges: lack of autonomy or customary law, and inapt capacity development. Thus, the successful establishment of WUAs depend on all stakeholders involved.

Farmers in Ethiopia, on the other hand, are used to customary law that has often led to an over-allocation of water resources because decisions were made by more powerful traditional social actors. Irrigation is a relatively new concept in Ethiopia, a country where an estimated 132 billion cm of water is potentially available for human use. However, the upgrading from rainfed farming to small scale irrigation has served to embed the challenge of water over-usage in irrigation, thus negatively affects cropping and soils.[6]